Get fresh music recommendations delivered to your inbox every Friday.

from Drive, Sparky by Private Circus 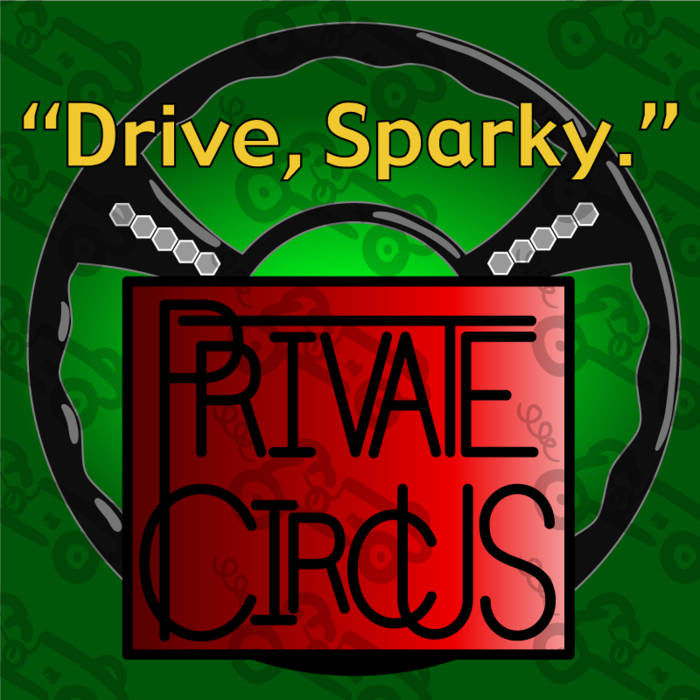 Slates started as an offhand suggestion: make a song out of the “slates” from each of the other songs. A slate comes from the movies, where they marked the scene number and other identiﬁers on a slate chalkboard with a clapper on the top, the thing with the black and white stripes. It provides the sound department a visual cue so they can synchronize the sound to the action. In our case, we needed a common sound across all tracks so that when we pulled it into Pro Tools, two channels at a time (all I could afford), we’d have a sync cue.

Well, with three of us in the room, things were bound to get out of hand. It started with the djembe stroke. Then Jerfo tried to get the pager to make noise at the right time. Then the Donald Duck going berzerk impression from Otto.

But there’s only so many things you can do in the 5 seconds or so per song. It wasn’t a lot of sound bites.

But we did have nine whole songs recorded. And two of them are kind of silly (Just Out yesterday) and extremely silly (PrivateCircus). Naturally I expanded my mandate at that point.

Then, while playing around with it, Sebbo came to visit, so I played it for him. He found it interesting, but wanting.

I agreed. It wanted a story. So I wrote some lyrics. Quick, simple, and to the point. I started with the title, Slates. The ﬁrst thing that popped into my head was “clean slate”. It went from there.

This song was composed entirely in Pro Tools LE®. As time goes on it’s less and less likely that it could be played live.

It’s very important to hear this song in headphones or sitting in the stereo sweet spot. If you have your speakers at least 6 feet apart, stand a few feet in front of them, right in the center, and move up and back until the sound opens up. It’s a good place to listen to all stereo music. Slates, in particular demands it, though it’s still fun even in mono.

It’d also be nice if you had decent bass response. Otto did some nice work on the kick drums to get a big sound. However, resist the urge to turn on the “loudness” control on your stereo. All Private Circus songs are mixed to provide a good balance in a variety of speakers of reasonable quality. On this song, however, you might suffer sonic trauma if you are sitting in the sweet spot with the loudness on, and this comes on.

Bandcamp Daily  your guide to the world of Bandcamp

Nightmares on Wax and Bremer McCoy stop by with their sublime new LPs.